It all began back on a Saturday morning in July of 1995 when six local farmers trucked in tomatoes, sweet corn, apples and berries to sell at Shaker Square in Cleveland. This was the humble seed that sprouted into the highly successful and nationally recognized North Union Farmers Market with ten locations across Northeast Ohio.

On Saturday, July 18, 2015, the market officially celebrated its 20-year birthday with a “party at the market” at the Shaker Square location during normal market hours of 8 a.m. until noon. Market shoppers enjoyed a birthday cake, live music, festive entertainment and ‘Chef at the Market’ samples featuring local farm produce. North Union recognized and honored the farmers who have been vendors with the market for its entire 20-year history. 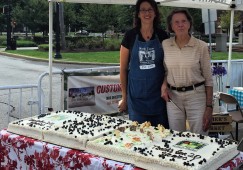 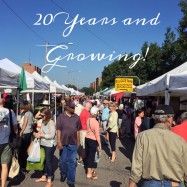 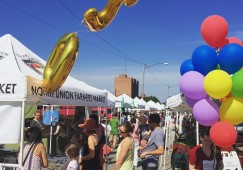 Under the leadership of a community board and Executive Director Donita Anderson, North Union has grown into Ohio’s first certified producer-only market, with a ten-market network of farms providing healthy foods, cooking and nutrition education, local art and music at locations across Northeast Ohio. “We have been pioneers, helping spur Cleveland’s local food movement for the past 20 years,” says Anderson. “The market creates a connection between consumers, chefs, restaurants and our farmers. More than 150 chefs give demonstrations and educate consumers at our various market events.”

Anderson has seen many changes over the years – from the early days with markets open only 10 weeks at the height of harvest season to a year-round indoor market at Shaker Square. Vendors have increased from the six original farmers to a current 128, including nurseries, herb farms, mushroom farms and others — alongside local artists, bakers and other vendors. Offerings have expanded to include specialty crops, heirloom produce and multiple varietals – including an increase from just three types of peppers to 20 variations. Farmers now sell eggs, artisan cheese and fresh yogurt (“so much better than what you buy in a store!” says Anderson). Serving consumers’ growing interest in both health and flavor, farmers provide produce like kale and numerous varieties of lettuce.

North Union Farmers Market has worked hard to educate consumers about how to prepare the foods they buy, whether in conversations with chefs at the market or directly with growers. “We promoted our ‘Chef at the Market’ from the beginning, with chefs using local produce and sharing recipes. And what’s wonderful about a market is connecting with the farmer over the table, and learning about all the varietals they offer and becoming aware of growing seasons in Ohio,” adds Anderson. The market also provides education to Cleveland children via their “Mighty Locavores” classroom program, as partners in the fundraiser for the teen program Green Corps at Cleveland Botanical Garden and The Frittata Project to teach low-income families how to create simple meals with local foods.

The number of market visitors has increased dramatically as well. In its first few years, about 500 people showed up for each Saturday morning market at Shaker Square. Now, about 9,000 attend during the four hours the market is open each week – and that’s not counting visitors to the seven other markets open during the summer.

Live music has always added a sense of joy and community at the markets, with Cleveland Institute of Music students and younger musicians playing for donations at the early markets and continuing today. With Cuyahoga Arts & Culture grant funds, the market also hires local musicians or traveling groups from across the country.